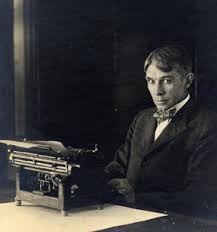 Although many of us know Carl Sandburg by his poetry, “The fog come on little cat feet…”, but Sandburg also supported himself as a reporter. This former socialist, railroad vagabond, traveling salesman (he sold Stereoscopic photographs) had a unique talent for disarming people to confide their thoughts and to tell their stories. Sandburg attributed this talent to his hobo adventures, saying, “I have often thought that this training of my tramp days is due much of my success as a story-writer.” (Niven; Carl Sandburg: A Biography)

Carl Sandburg was a two-time recipient of the Pulitzer Prize—first in 1940 for his biography of Abraham Lincoln and again in 1951 for Complete Poems. Additionally, he authored children’s’ books, The Rootabaga Stories, written for his daughters when they were young.

Sandburg wrote children’s stories to first entertain his own children

Although Sandburg’s reputation as a poet was flourishing and he’d won awards from Poetry magazine, poetry did not pay the bills for his growing family. Carl got a job as a reporter in the newsroom at Chicago Daily News in Chicago, working alongside famed bohemian reporter Ben Hecht, his foray into the “bohemia” of Chicago “down-and-outers” who attended open air lectures, took part in demonstrations and moved on down the rails if they chose. (The Chicago Race Riots 2013 intro by Paul Buhle). They were also “deeply sympathetic” to the growing black population in Chicago.

His most important work as a reporter was his coverage of the racial issues plaguing the city, an assignment he received prior to Chicago’s Race Riot in 1919. The articles ran three weeks before the riot and were later compiled into a separate pamphlet after the riots occurred—The Chicago Race Riots: July 1919—Sandburg’s first non-fiction publication. 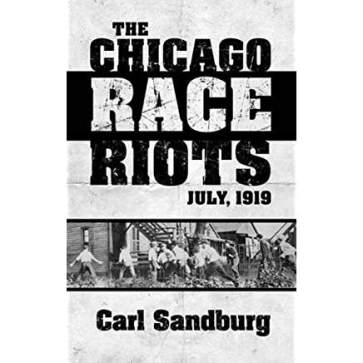 In this 15-article series, Sandburg investigated the many issues affecting those in the Black Belt—jobs, rents, unions, gambling and lynchings. He found clear racial bias, providing insight into the racial tensions underpinning everyday life for blacks and preventing free movement in jobs and housing. His articles cited hard facts, but also included poignant interviews that spoke to the frustrations and dreams of those living in Chicago’s Black Belt.

Notebook in hand, Sandburg interviewed shopkeepers, housewives, factory workers, preachers, gamblers, pimps and others, searching to understand the racial tension in Chicago, trying to place it in a national context, as riots had broken out in other cities in United States that same “Red Summer”—including Washington, New York and Omaha. And he analyzed reports of race warfare in other cities, reviewing crime rates by blacks and researching gambling establishments.

In his article series, he reported the facts. And they weren’t pretty. Infant mortality in the Black Belt was seven times higher than in other neighborhoods close by.

Housing was severely overcrowded, taking in more than double the amount of people in poorly maintained buildings than prior to the Great Migration of 1916-1918. A housing survey deemed Chicago housing for blacks in Chicago as “reprehensible” and “a menace to health”.

Thousands had come north in the hopes of bettering their lives; yet, had little chance of getting skilled and unskilled jobs, with black women taking “the most menial and by far the most underpaid work”.

His conclusion was that the “race question” was rooted in economic and educational inequity.

Equality in Labor—Others Speak Out for Rights

Sandburg suggested that work for blacks should have three important features:

Sandburg wasn’t alone. Others believed in addressing the labor issue with training and education, and a more open door policy.

At an American Federation of Labor meeting in July, an organizer told the crowd of 2000 blacks, Lithuanians, Poles, Slovaks and Italians that ”there ain’t no Negro problem any more than there’s an Irish problem or a Russian or a Polish or Jewish or any other problem. There is only the human problem, that’s all. All we demand is the open door.”

Julius Rosenwald, president of Sears, Roebuck & Co., was committed to education for blacks, founding over 300 schools in the rural south with plans for 700 more.

The National Association for the Advancement of Colored People (NAACP) called for equal rights—to a fair trial, to education, to defense against lynchings, to equal service on trains,

Joel Spingarn, a white Columbia University professor who chaired the NAACP for six years, agreed that the race issue was national in scope, and advocated for federal aid and a biracial commission to investigate racial problems on a national level.

Blacks Returning from World War I

Chicago’s black war veterans told Sandburg that they had made “the supreme sacrifice” and “now we want to see our country live up to the constitution and the declaration of independence.”

Upon their return, white soldiers viewed blacks as taking jobs that belonged to them. But particularly disturbing, was the treatment of black veterans in uniform. Sandburg reported on the case of Wilbur Little, who had been beaten and harassed for wearing his uniform after his return from Europe, and was eventually found dead, badly beaten and still wearing his uniform.

Spingarm stated that “every colored soldier that I have talked with in France, Germany or America has a grievance.”

Unfortunately, Sandburg’s warnings about the need to address the racial issues went unheeded. On Sunday, July 27th, temperatures skyrocketed to 96 degrees as tensions rose between white and black beachgoers along the Lake Michigan lakefront, with stone throwing and skirmishes throughout the day. That afternoon, a black teenager rafting with friends drowned after witnesses claimed he was stoned by a white man. A white officer refused to arrest the accused. In anger, a black man shot at white officers, who returned fire, killing the black man. The city erupted in violence as each side used the incident to spark anger and vengeance.

A black home attacked during the riots

Sandburg completed an introduction to the book after the Chicago Riots had taken place. He reported that three conditions marked the riots as different from others around the country: 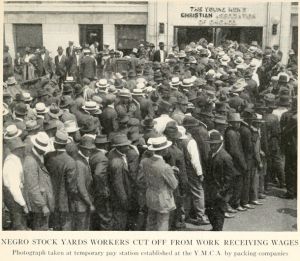 Some of the recommendations made by others in the article series speak to a national/federal level of need.

Spingarn’s suggestion, appearing in Sandburg’s last article in the series, suggested that “the race problem is not a local, but is a national question” demanding federal attention and aid. In particular he cited the poor treatment of blacks in the South and encouraged educated whites to action. “ The intelligent white man who is not informed on the neglect and the wrong training of the negro in the south is as dangerous to future peace and law and order as the so-called bad negro.”

Blacks under police protection after homes were destroyed

“I have fought for my country two years as a major of infantry,” Spingarn was quoted, “and I wish to give it as my mature judgment that no barbarities committed by the Prussians in Belgium will compare with the brutalities and atrocities committed on negroes [sic] in the south. In effect, you may say that the Negroes who come north have issued from a system of life and industry far worse than anything ever seen under Prussianism in its worst manifestations.”

As to the labor issue, Sandburg quoted Dr. George Edwin Hayes, a black scholar with a master’s degree from Yale and a Ph.D. from Columbia. “When the colored man can come into the labor market and bargain for the sale of his services on the same terms as other workers, a great deal of what is termed today the ‘race question’ is going to be settled.”

The most striking aspect of Sandburg’s reporting is that much of what Sandburg wrote or what was said by others in his series, is as true today and it was then. In the 1969 reprinting of Sandburg’s book, Ralph McGill, editor of the Atlanta Constitution wrote: “How much do cities, a people, a nation learn in fifty years? Not much.”

And I ask now, “How much have we learned in 100 years?” Certainly not enough.

Below is a poem by Carl Sandburg, inspired by World War I, the Race Riots of Chicago and the continued violence against blacks in the south.

Man, the Manhunter by Carl Sandburg

I saw Man, the man-hunter,

Hunting with a torch in one hand

And kerosene can in the other,

And the high cry rang,

the high cry of Man, the man-hunter:

Kill him! Kill him! The son of a bitch!

In the morning the sun saw

Two butts of something, a smoking rump,

And a warning in charred wood:

Well, we got him,

the son of a bitch.

* I have replaced the original notation of “sbxyzch” with son of a bitch, which is what Sandburg intended, but it could not be published at the time.