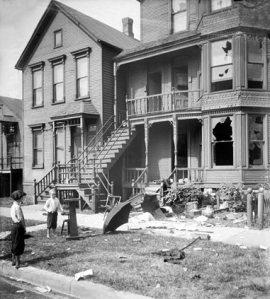 Black Home After a Bombing

During the summer of 1919, Chicago experienced one of the worst Race Riots in the nation’s history. At the end of the eight-day conflict, 15 whites and 23 blacks were dead and at least 537 seriously wounded.

Although the length and brutality of the riots were unanticipated, the seeds of the riot had been planted in the years and months leading up to that day in July of 1919. Many factors combined to unleash hatred and violence against Chicago’s blacks. And a new-found rage against inequality drove the blacks to fight back.

The Great Migration saw the numbers of blacks rise. Between 1910-1920, Chicago’s black population soared from 44,103 to 109,458—an increase of 148.2 percent, the largest increase rate of any ethnic group in the city. From 1917 to 1919 alone, an estimated 50,000 black migrated to Chicago. (Source: Red Summer) And these new black immigrants were crammed into a small stretch of land called The Black Belt, crowded into dilapidated housing for high rents and without adequate services. The slum conditions were further stretched with more than double the population than before the war.

Tension in the Workplace

Business owners in the meatpacking, corn refining and steel industries used black workers to break strikes, undercut wages and further tensions between the ethnic groups. Southern rural blacks were recruited through ads, some saving to buy their own train fare, and others brought up free on special “company” trains. 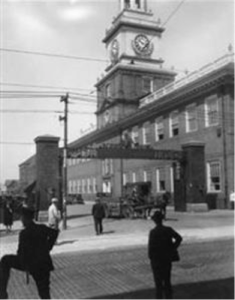 Front Entrance to the Stockyards in Chicago

Most black workers were not unionized, which led to tensions with other ethnic groups who did support unionization as a way to increase wages and better working conditions. Blacks were understandably wary, as the factory owners held the power over their jobs and often supported community groups and activities in black neighborhoods.

The end of World War I saw increased competition for jobs combined with a declining demand for goods, and, therefore, jobs. White servicemen looked to return to the workforce, while blacks and other immigrant groups struggled to hold on to the jobs they had gained.

The 370th Infantry Regiment of Chicago

Returning black soldiers felt that their service to protect freedom and democracy abroad should also extend the basic rights of adequate housing and equality in their own country. When these rights were denied, many grew angry. (Pictured above are soldiers of the 370th–one of the few black regiments that was allowed to fight in World War I.)

“The return of the Negro soldier to civil life is one of the most delicate and difficult questions confronting the Nation, north and south.”

— George Haynes, Fisk University professor and director of Negro Economics for the U.S. Department of Labor.

A precursor to the physical bodily violence was a rash of house bombings. In a little over a year, 25 homes belonging to blacks or to realtors who sold to black were bombed. One of the bombings resulted in the death of a black girl.

Between February 5 and June 13 of 1919, eight bombs or dynamite containers exploded on doorsteps of buildings in the city’s south division—buildings on streets adjacent to the “Black Belt,” which was about 80 per cent black.

Reports after the rioting lay much of the blame of violence on groups of young white men in so-called social clubs called “Athletic Clubs.” These groups of teenagers and young men, many of the roughest of whom were of Irish-American decent, played baseball and threw parties, but they also wreaked havoc by staunchly defending their territory with the “color” line at Wentworth Avenue. They terrorized blacks for years. They created problems for black packing house workers as the workers needed to cross the Irish “Back of the Yards” neighborhood in order to get to work, making blacks subject to assault and intimidation.

Chicago claimed a number of these “athletic clubs”. Perhaps, the most notorious of these was the Morgan Athletic Club in the Stockyards neighborhood, known by its honorary title of “Ragen’s Colts” after its founder and benefactor, politician Frank M. Ragen. One source cites a membership of nearly 3,000, with a vigilante slogan of, “Hit me, and you hit 3,000.”  While Ragen’s Colts controlled a large neighborhood in the Irish section of the South Side near the stockyards, other groups held additional sections of the South Side. These gangs included Our Flag Club, the Sparkler’s Club, the White Club, and the Hamburgers. (Source: McWhirter) 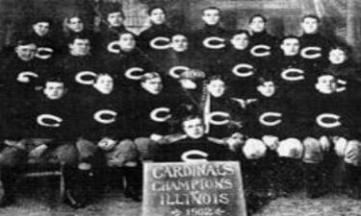 When the rioting began, the athletic clubs unleashed their full fervor against black residents and workers. They had been waiting for a race riot and fully exploited the opportunity.

The future mayor, Richard J. Daley, was a 17-year-old member of the Hamburg Athletic Club in 1919, an Irish-American organization later identified as one of the clubs responsible for instigating the riots. It was never concluded that Daley himself participated in the violence.

The Chicago police force was predominantly white, and further, predominantly Irish. There were only about 300 black officers in the entire city. Many white officers had a reputation for being less than fair to blacks. Walter White of the NAACP, in his 4-week investigation of the riot, cited  “police inefficiency”  and “unpunished crimes against negroes” as two of the “eight reasons” for the violence. (White)

The black voting block in Chicago was a force. Mayor Big Jim Thompson had actively sought the black vote during his campaigns, contributing heavily to his wins. Many whites resented this voting power held by blacks, and athletic clubs were known to disrupt black polling places on election day.

A Summer of Race Riots

Prior to Chicago, the nation had seen an outbreak of racial violence. In the summer of 1919, race riots broke out across the country: Washington, D.C.; Knoxville, Tennessee; Longview, Texas; Phillips County, Arkansas. and Omaha, Nebraska. In fact, the months from April – November 1919 were so tumultuous and bloody, it was called “Red Summer”. Riots and lynchings claimed hundreds of lives.  The white supremacist Ku Klux Klan organization revived its violent activities in the South, including 64 lynchings in 1918 and 83 in 1919. (History.com)

Two of Chicago’s Most Famous Predicted the Riot

A well-known prophet of the riot’s outbreak was Carl Sandburg. Although many know of him through his poems, (my favorite line being “The fog comes on little cat feet”), Carl Sandburg was a reporter for the Chicago Daily News. He covered conditions in the Black Belt prior to the riot and also reported on the riot’s aftermath. 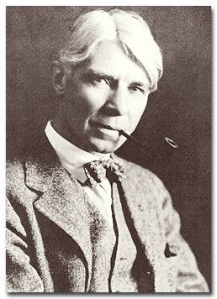 Sandburg went into the neighborhoods to investigate discrimination. He noted that blacks received lower wages and working positions, yet paid higher rents than whites to live in crowded and run-down buildings. He found an infant mortality rate 7 times higher than in other neighborhoods. And blacks told him of their desire to flee lynchings in the south and better their living standards, the quality of schools for their children and their ability to be involved in the democratic process of voting.

Sandburg highlighted these issues in a series of 16 articles for the paper, (which included a summary written after the riot). It appears no one paid too much attention.

Ida B. Wells-Barnett was even more direct. She wrote a letter to the Chicago Tribune, warning that Chicago was on the brink of riot, and would become another East St. Louis. 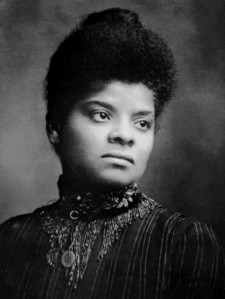 Ida B. Wells-Barnett Warned of a Coming Riot

Wells-Barnett knew of what she spoke. The previous summer, she had gone down to East St. Louis, Illinois, to gather facts after that city’s race riot. The two-day riots had left 150 blacks dead and almost one million dollars of property destroyed. As she accompanied black women back to their homes in a Red Cross truck, she saw the devastation. Homes looted. Pianos, furniture and bedding destroyed. Windows broken. Some homes even burned. But more alarming were reports that the soldiers had not intervened when black people were attacked. She reported her findings to Illinois’ Governor but could not get blacks to testify. Her only success was in raising money through an article in the Defender to free Dr. Bundy, a black dentist facing a life sentence for leading a group of blacks to arm and defend themselves.

Here is Wells-Barnett’s letter to the Editor. It is a fervent  plea for action, as she notes how the home bombings and other acts of violence mimicked those prior to the East St. Louis riots. 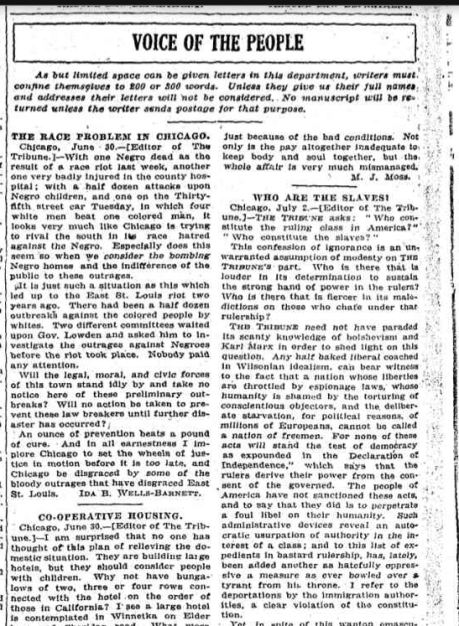 “Will the legal, moral, and civic forces of this town stand idly by and take not notice here of these preliminary outbreaks? Will not action be taken to prevent these law breakers until further disaster has occurred?”

Unfortunately, no one heeded her warning.

Cameron McWhirter; Red Summer: The Summer of 1919 and the Awakening of Black America; St. Martin’s Griffin; 2011

“Prelude to a Riot: Irish Athletic Clubs and the Black Belt in 1919”; Americanhistoryusa.com

“The Race Problem in Chicago”; by Ida B. Wells-Barnett on June 30; published in the Voice of the People section, by the Chicago Tribune, July 7, 1919